Where Can I See A Cassowary In Cairns?

Cassowaries can’t be found roaming the streets of Cairns city but, you can see them in the wild, wandering around the surrounding rainforests and national parks. Not far from Cairns, you can spot cassowaries in their natural habitats of the Daintree rainforest, Etty Bay and Barron Falls National Park. And, if you’re looking to get up close and personal with these giant birds, Hartleys Crocodile park, Port Douglas Wildlife Habitat and Bird World Kuranda all have cassowary enclosures! 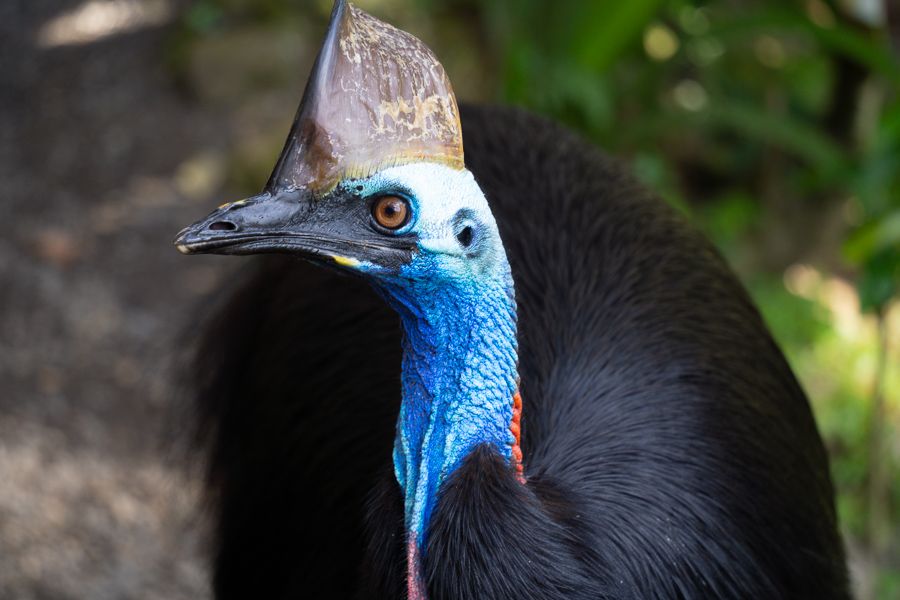 Tropical North Queensland is much like Jurassic Park, not only because of its diverse rainforest vegetation or vibrant and exotic plants but also for its dinosaur-like wildlife. The most prehistoric-looking creature you’ll find in the rainforests around Cairns are the cassowaries! cassowaries are large colourful, flightless creatures and the heaviest bird in Australia. The casque on its head, feet and respiratory structure is what makes them look so similar to the dinosaurs. Why not make your trip more exciting and see where you can spot cassowaries in and around Cairns?

Where can I see a cassowary in the Wild in Cairns? 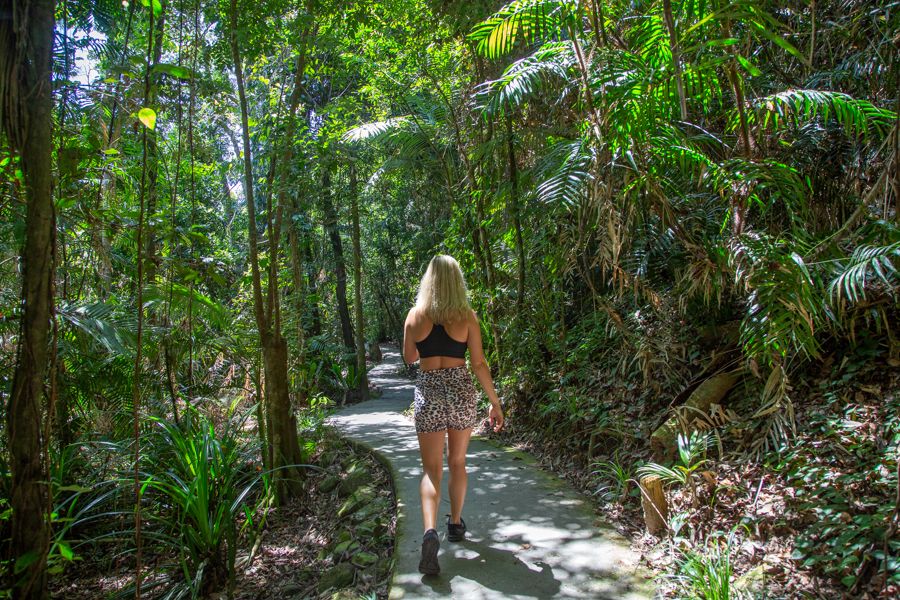 If you want to see cassowaries in the wild, here are the locations you are most likely to see them in their natural habitat.

Visit the Daintree it has over 430 recorded species of birds, and is our top pick to catch sight of a cassowary, Australia's most well-known bird. Standing up to two metres tall, they have blue faces, and a large brown bony helmet on their heads (the casque). They are an endangered and protected species making them a special sight to see in the wild. With a high population living in the Daintree, lucky visitors can see them while making their way through the oldest living rainforest in the world!

Along the cassowary coast and 90-minutes south of Cairns you’ll find a popular local’s beach. Visit this location for a romantic early morning or late afternoon stroll along the beach and catch sight of the amazing cassowary birds, whilst you watch the sunrise or sunset. Complete your day of natural marvels by making a visit to the nearby waterfalls.

Barron Falls National park is located in Kuranda, a 30-minute drive from Cairns and is set amongst the Wet Tropics World Heritage. Home to an abundance of species; birds, frogs, insects and cassowarys! With wheelchair-accessible boardwalks, there is plenty of space for everyone to explore.

Where can I see a cassowary up close in Cairns? 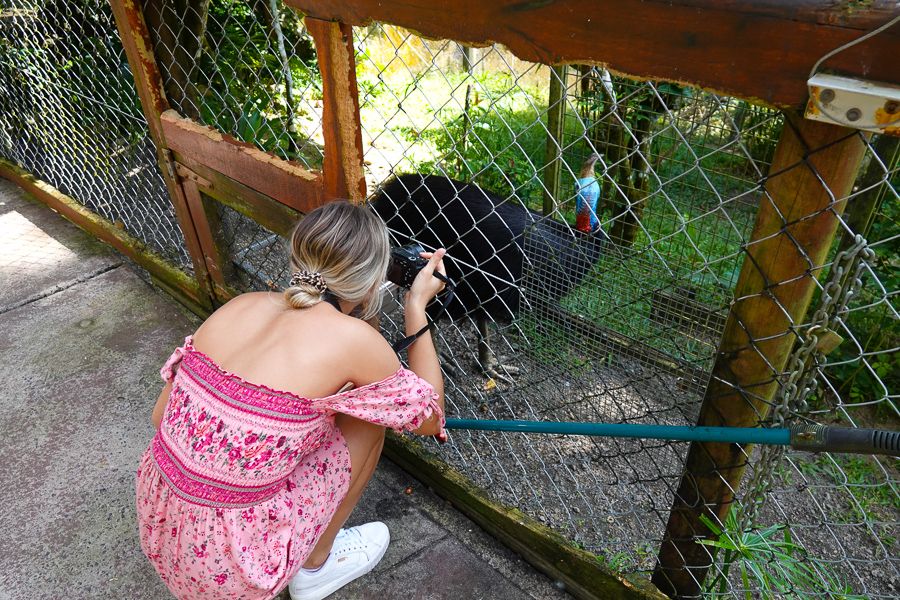 Due to habitat decline, cassowary sightings in the wild are not guaranteed and if you’re keen to catch a sight of these animals, here are a few closed enclosures where you can get up close with these giant birds.

A crocodile park is not the first place you’d think to see a cassowary. However, Hartley’s crocodile park features the cassowary walk and even a daily cassowary feeding so that you can see this magnificent endangered species up close.

Discover native wildlife like the Southern cassowary or Lumholtz tree Kangaroo at Port Douglas Wildlife Habitat. You can find the cassowaries in the rainforest habitat alongside the stunning Eclectus parrot and mesmerising Rainbow Lorikeet, make sure to bring your camera!

In Kuranda, the Barron Falls national park is home to cassowaries but, if you haven’t had any luck seeing them in the wild, you can see them at Bird World. Bird World has almost 60 different bird species and is home to one of Australia’s largest collections of free-flying birds.

Fun Facts about the cassowary

Things to know when cassowary spotting

Please remember to exercise caution with these wild animals by keeping a safe distance. cassowaries are known to be the world's most dangerous bird and are equipped to kill. However, these fruit-eating birds are usually very shy creatures, and attacks are rare, but they can be aggressive especially if their chicks are nearby. Also, if you’re driving in the areas of their habitats, drive cautiously and report any injured animals to a local vet.

Planning to go cassowary spotting during your Cairns getaway?

GSL Cairns Reef Hopper
"It was amazing! I got the chance to sit next to the pilot and really enjoyed the flight! I would tot..."
Denise Mach
East Coast Build Your Own Package
"Easy to book, very accommodating. Looking forward to it..."
Aoife McQuaid
East Coast Build Your Own Package
"It was amazing. Would love to win my money back to go again!!!..."
Karl Brown