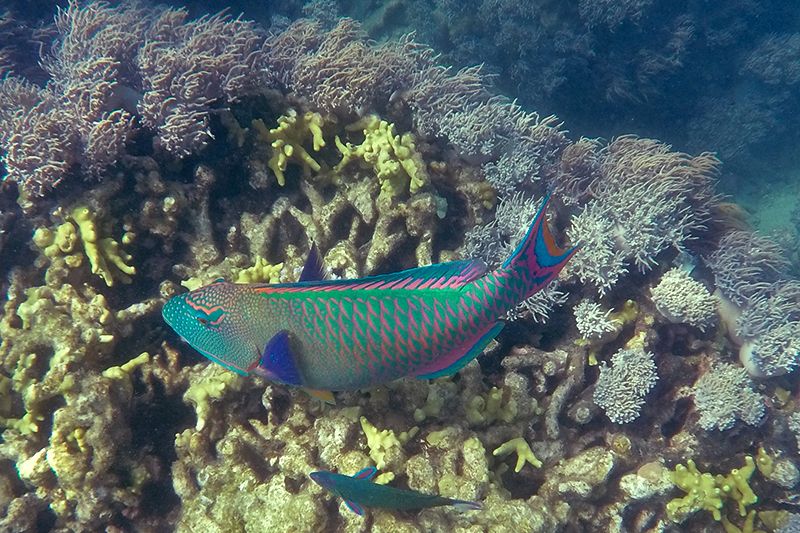 Moore Reef shares a coral space with Elford Reef and hosts a huge variety of coral environments. Moore Reef ranges from 1 - 25 metres in depth, making it great for scuba diving, with plenty of reefs that are great for snorkelling. It’s a favourite reef for many visitors, as it promises a huge variety of marine life, coral formations, and reef types! It has drop-offs and sea caves, making for diverse experiences each and every time, giving guests a memorable Great Barrier Reef experience. It is located close to Fitzroy Island and is often visited in conjunction with the island!

Some parts of Moore Reef experience consistent water flow and clear water, while other parts are murkier and host different marine life, meaning each reef varies, depending on the quality of water and access to sunlight and nutrients… But the amazing diversity is just another reason why Moore is so great! The variety here is a huge appeal, giving you many difference seascapes within one reef! Trips to this reef will take you to the best reefs for the day of, ensuring you have the best visibility possible.

There are over 15 permanent moorings found on Moore Reef, as well as a pontoon and a helipad! You may visit sites such as Fish Bowl, West Timor, East Timor, 5 ways or Wildside during your trip to Moore Reef, getting to check out amazing marine life along the way.

Sea turtles are always a favourite to spot while snorkelling or diving, no matter where you are in the world! The Great Barrier Reef is home to 6 out of 7 species of all sea turtles found worldwide and they are often spotted while guests explore the many reefs here. Keep your eyes open as you look for these camouflage experts - they blend in seamlessly with the coral and surrounding reef!

Batfish are a friendly species of reef fish they are often seen hanging around the bottom of the boat. Keep an eye out for these flat, disk-shaped fish as soon as you pull up to the reef as they often come to greet the boat. They have vertical black stripes on a silver body and are generally not very afraid of humans, making for a great subject for a picture or two!

Moorish Idols are easily distinguished by its appearance, with black, white and yellow colouring consisting of black vertical bands and a long dorsal fin that extends behind its body. They are famous (cinematically speaking) as one of their kind appears in the movie ‘Finding Nemo’ as the jaded aquarium fish, Gill. They are found in a variety of reef environments, so keep an eye out for these beautiful fish wherever you go!

Maori Wrasse are known as the puppy dogs of the Great Barrier Reef! These stunningly large and beautiful reef dwellers are known for approaching scuba divers and snorkellers and are often curious about their visitors. Females are a smaller, brown version of males, who are large, colourful and have intricate patterns on their faces. They have large, pouty lips supported on a huge mouth, giving them a cute, yet larger than life look! They are bluish green and are also known as the humphead wrasse, Napoleon Wrasse or Napoleon fish.

Damselfish are a populous species on most parts of the Great Barrier Reef. These small (but mighty) fish come in a huge variety of shapes and colours and are often spotted in groups. They hide in soft corals, darting out to grab food as it passes by, and will defend their territory with their life (but don’t worry, they are no danger to people).

White tip reef sharks are another fan favourite for those snorkelling or diving on Moore Reef. Far from dangerous, these shy toothy predators prefer to focus their attention on smaller fish and marine animals and are mostly afraid of humans. They grow no larger than 1.6m and have a slender body and bulky head and are easily distinguished from other reef sharks by the white tips on their dorsal and tail fins. They are usually hiding out in caves by day, and spend their nights hunting on the reefs.

Due to the different environments found within Moore Reef, you will find a huge variety of corals including mushroom coral, brain coral, finger corals, staghorn, and honeycomb coral. Each different type of coral is unique in appearance, colouring and the animals it may host! Corals are the building blocks of the Great Barrier Reef, playing the most vital role in its existence and health.

Visit Moore Reef and see all the exciting marine life for yourself by joining a tour that will allow you to snorkel, scuba dive, explore and more! Ask our team of travel experts which tour is right for you and get on your way to the adventure of a lifetime.

Community effort brings $11.5 million jetty to Yarrabah...
Work for the new Yarrabah Jetty at Gribble Point near Cairns is set to go ahead....
Read More
Adventurers are flocking to this stunning tropical island dubbed the 'most roman...
Lizard Island has been dubbed the most romantic place on Earth as Aussie's head ...
Read More
$200 Free Tour vouchers Scheme ...
Free travel voucher scheme to help Australias holiday at home...
Read More