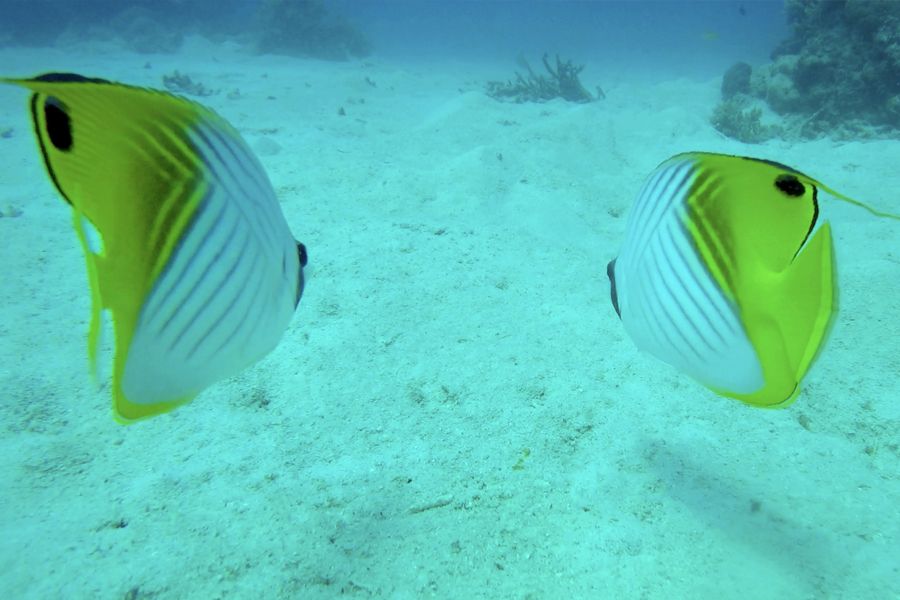 Pellowe Reef is found in the Great Barrier Reef Marine Park near Milln Reef, Thetford Reef and Moore Reef on the edge of the continental shelf. This stunning site is visited from Cairns and is located about 35 nautical miles offshore, and is visited by both overnight and day trips! Pellowe is a more rare reef site to visit as the conditions must be just right, making it a special treat for those who do get to visit it. Tides and weather conditions must be ideal as this area has strong currents that can be dangerous to divers and snorkellers, and as safety is extremely important, you will only be able to go here if all the conditions are met! While a small reef, it offers a large variety of marine life to make each and every trip interesting to its visitors. Visibility ranges as far as 20m and depth here range from 5 - 20m and the reef has exciting wall dives and swim-throughs, making it a particularly great site for scuba divers.

Things you may see at Pellowe Reef:

Moray eels are always an amazing creature to see while beneath the waves. Typically depicted as a scary underwater animal, moray eels are not likely to attack humans, often choosing to retreat when approached! You can find them in many places around the reef, often with their heads poked out of crevices or cracks in the coral beds. They have long slender bodies, large teeth and small eyes from which they will keep an eye on their reef visitors!

Bull rays are a huge species of stingray, often found in sandy beds on the ocean floor. They are a 'megafauna' and can reach up to a whopping 116kg!  They can grow to be over 1m wide and are generally quite shy. To see these amazing animals, keep your eyes down where you might see them partially buried in the ocean floor! They feed down there, often hiding under the sand, waiting for their next meal. Bull rays are considered to be venomous and became famous worldwide following the accidental death of celebrity Steve Irwin. They will be no danger to divers or snorkellers as long as you keep a safe distance away while you admire them.

Barracudas don't have a good reputation as far as marine animals go - but don't be alarmed if you see them while snorkelling or diving! While they are a low threat to humans, it's best to avoid wearing jewellery while on Pellowe Reef - the shiny reflection may remind them of fish scales and entice them to get close! Other than that, they will likely maintain their distance as they search for more attainable food. They are extremely skilled hunters, choosing smaller fish and molluscs are their meal of choice and can hunt at lightning-fast speeds! Chevron barracudas are distinguished by their long, slim bodies, silver scales and chevron-shaped pattern along their sides.

You will see many different coral species at Pellowe Reef! Corals are the building blocks of the Great Barrier Reef and Pellowe is no exception. Take the time to enjoy the huge variety of corals present in the marine park - they often attract specific species of fish which use them as both a source of food and shelter!

In the shallows of Pellowe Reef you will find anemones which host orange and white clownfish! The small fish have skyrocketed to stardom since their starring role in the movie 'Finding Nemo,' making them a favourite animal to see for many divers and snorkellers. They live within the waving branches of their host anemone, which is where they spend their entire life. Closely related to jellyfish and corals, the clownfish's home is actually an animal, despite their appearance! The two have a symbiotic relationship, meaning they both benefit from their living situation, as the clownfish keeps its host clean and free of parasites and debris, while the anemone protects the fish with its stinging tentacles.

You can visit Pellowe Reef for yourself - just ask our friendly travel experts which tour is right for you to get on your way to exploring the Great Barrier Reef!